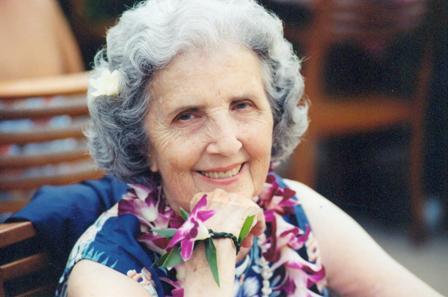 In Loving Memory of Adelaide Harrington 1919 - 2015 Adelaide Harrington, 95, died on April 27, 2015 at her home in Redondo Beach, CA, where she had been lovingly cared for by her daughter, Lianna. She was preceded in death by the love of her life and husband of 58 years, E. Ross Harrington, and her son, Steven Ross Harrington. Adelaide Bush (Stevens) Harrington was born on June 29, 1919 in Long Beach, CA the daughter of Frank Gilbert Haven and Permelia Adelaide (Harrison) Stevens. Her father was a Methodist minister and they lived in Fresno, Santa Monica and Pasadena. She graduated summa cum laude from the University of Redlands, where she was a member of the Delta Kappa Psi sorority and met her future husband. After corresponding regularly during WWII, Ad traveled to Virginia where they were married on October 19, 1944. They were part of the Greatest Generation. Following the war, they lived in the Simi Valley, South Pasadena, Shafter and Taft. Dr. and Mrs. Harrington moved to Redondo Beach in 1963, when he became Superintendent of Schools. Ad was an active member of the Redondo Women's Club, American Association of University Women (AAUW)and of the Women's Society of Christian Service at the Methodist Church. She sang alto in the church choir and taught Sunday School. She worked at Occidental Life Insurance in Los Angeles and then for her next door neighbor, Alice Wilson, settling insurance claims. Following her husband's retirement, she enjoyed traveling the world with him. Ad was supportive of her family. She cared for her mother in her home until her passing. She was an active participant in the lives of her children and grandchildren. She is survived by her daughter, Lianna, son-in-law Siddiqui, her grandchildren: Autumn, Jesse, Beth, Andrea, Steven, and five great-grandchildren. A Celebration of Life Service will be held at 2:00 pm on Saturday, May 16, 2015 at the First United Methodist Church of Redondo Beach located at 243 S. Broadway, Redondo Beach, CA 90277. Private interment next to her husband and parents will be at the Mountain View Cemetery in Altadena, CA.