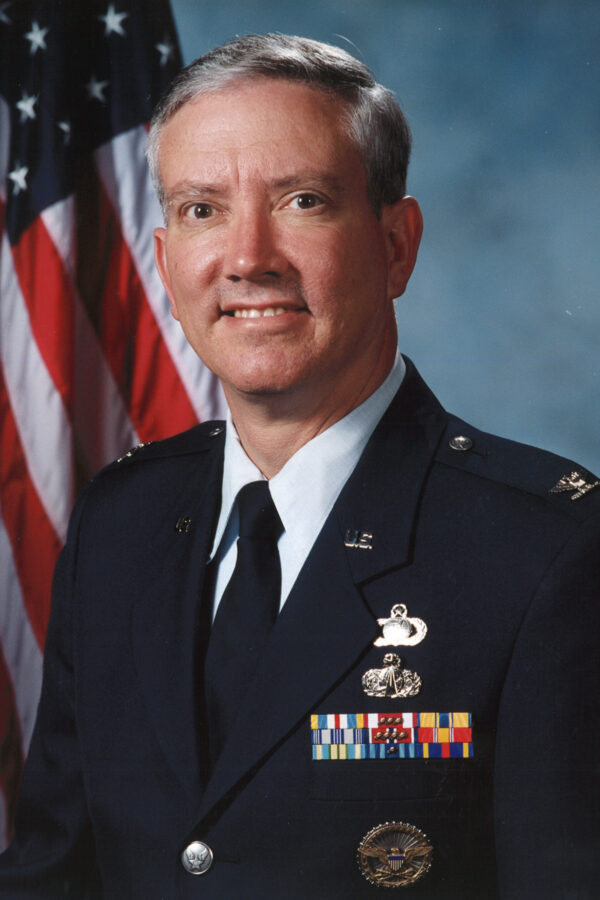 Born at the U.S. Army Hospital in Shirley, Massachusetts on February 24, 1956, Ed was the eldest child of the late Edward Thomas Alexander and Dawn Marie Caron Alexander. Beside his parents, Ed is preceded in death by his sister Karen Alexander.

In his early years, Ed decided to continue with the family legacy of joining the United States Air Force. Ed graduated with honors from Acton-Boxborough Regional High School where he was a scholar athlete. He attended the University of Massachusetts on an Air Force ROTC scholarship and graduated Magna Cum Laude in 1978 with a degree in Mechanical Engineering. Ed’s first assignment in the Air Force was to obtain a master’s degree in Systems Engineering from the Air Force Institute of Technology at Wright-Patterson Air Force Base, in Ohio. Ed went on to hold multiple advanced degrees including a Master in Business Administration and a Master in National Resource Strategy. Ed is a distinguished graduate of the Industrial College of the Armed Forces, graduating first in his class.

Ed completed 24 years of service in the U.S. Air Force, in acquisition of space and missile defense systems, with assignments to the Office of the Secretary of Defense, Office of the Secretary of the Air Force and multiple program office assignments at the Space & Missile Systems Center. In his last position, Ed served as the System Program Director of the Space Superiority Systems Wing. Ed has received many awards and decorations, including the Defense Superior Service Medal, the Legion of Merit, and multiple Meritorious Service Medals.

After his retirement from the Air Force in 2003, Ed joined Northrop Grumman as Director of Space Superiority Programs where he was responsible for market area development and execution of a variety of Space Situational Awareness and Counter-Space programs. Ed held a variety of Business Development positions within Northrop Grumman including Deputy to the Vice President, Missile & Space Defense Programs, Acquisitions Manager Space Radar program, and Capture Manager, Restricted programs. In 2007 Ed was appointed Northrop Grumman Corporate Lead Executive (CLE) for the U.S. Air Force & Missile Systems Center (SMC).

Ed was a caring and compassionate husband, father, grandfather, brother, son and friend. Ed’s pride and joy was his twin sons Michael and Christopher with whom Ed lovingly taught and guided throughout their lives. Over the course of his assignments in the Air Force, and his many miles traveled, Ed always tried his best to be present at sporting events, birthdays and holidays. The boys were active with Boy Scouts where Ed was a Boy Scouts of America Scout Leader. He enjoyed his time leading and teaching boys and young men about the great outdoors. To Ed “Any day outside was a good day.” Ed loved all things outdoors including rock climbing, ice climbing, camping, hiking and teaching outdoor survival. Ed was also an avid mountain climber who summited numerous 14,000 ft. elevation peaks, 14’ers!

Ed believed that time left is all that counts, and that the remaining time was his responsibility. After his diagnosis, Ed demonstrated an attitude and wit where he accepted the knowledge of his devastating disease and together with his wife and family, Ed continued his lifelong health, fitness, and nutrition lifestyle. He continued to hike and take long walks and travel. Ed was always up for a great cup of coffee, a yogurt smoothie, a cold Heineken, a great meal, and he was always ready for a pull-ups challenge.

Ed will be deeply mourned and missed by his loving wife Nora; his son Michael and daughter in-law Sarah of San Pedro, CA; his son Christopher and daughter in-law Diana and their children Penny (2-years) and Cooper (1-month) of Long Beach, CA; his Sister Tracie Pereira and brother in-law Paul Pereira of Navarre, FL; his Brother James Alexander, and sister in-law Debra Alexander of Carmel, NY; his nieces and nephews, Grace and Nick Hooks, Erin Pereira, Nick Alexander, Renee Alexander, Bradley Alexander, and Courtney Alexander; and by Olivia Warschaw and her husband Brian Blankenship, and by Jonah Warschaw; and by all his relatives and cousins who deeply loved Ed, and by Air Force buddies, colleagues, and friends he made throughout his life.

Ed’s memory will live on in the California High Sierra and we wish him peace as he takes his heavenly climb.

Climb the Mountains and get their good tidings.

Nature’s peace will flow into you as sunshine flows

into trees.  The winds will blow their own freshness

into you, and the storms their energy, while cares

The family would like to give special thanks to the healthcare team at the UCLA Mary S. Easton Center for Alzheimer’s Disease and to Ed’s caregivers who gave wonderful, loving care, and to his longtime friends Fred and Evelyn McGregor and Dave and Jeannine Madden and to all the USAF friends who knew Ed.

In lieu of flowers, memorial donations may be made in honor of Ed’s life to the Wounded Warrior Project  https://support.woundedwarriorproject.org/

Thank you Ed for all your smiles, care, and love.